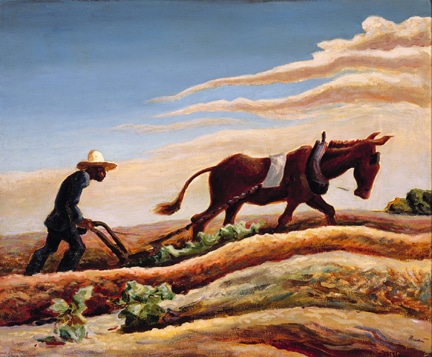 Ploughing it Under
Written by Dr. Henry Adams, author of “Thomas Hart Benton: An American Original”

I have always considered this one of Benton’s finest paintings. The basic motif of a ploughman in a field resembles farm scees by painters ofthe Barbizon school, but Benton gave this subject matter a uniquely national flavor with the sweepting Southern landscape, with its red soil; the African-American ploughman; and te distinctly American mule. Mules like these were not usually used as a draft animal in Europe, and most mules were bred in Benton’s home state of Misouri. Perhaps for this reason, he had a particular affection for them and drew the in an expressive way that is unique. As he once commented: “You know, the mule is a damned dramatic animal.”

Perhaps the most wonderful aspect of the painting is the sweeping rhythm of the design, including a sky filled with Benton’s inimitable clouds, which are one of the signatures of his work. Benton made a lithograph based on this painting but I have always felt that the design and draftmanship of the painting is significantly btter than the print, as can be seen by setting the two side by side.

Benton must have thought well of this painting since he included it in what was probably the most significant exhibition of his work held in his lifetime-the retrospective of his work held as Associated American Artist’s in 1939. This exhibition inaugurated the painting gallery of Associated American Artists and cemented Benton’s reputation as, along with Grant Wood, one of the two leading artists of the Regionalist movement. For once, New York critics were unanimous in Benton’s praise, and sales were large enough to enable Benton to buy a new home in Kansas City-the present Thomas Hart Benton historical site.

The date of this painting presents a little mystery, though one which I think can be solved. Benton made a lithograph based on this painting, which was the first print he produced for Associated American Artists (who published the majority of his prints). In the note that accompanies that print, in Creekmore Fath’s book on Benton lithographs, he states that he made the print and lithograph in 1934, based on a drawing he had made in South Carolina in that year. In the catalogue of the 1939 exhibition at AAA, however, where it is reproduced in a full-page illustration, plate #14, the painting is dated to 1929. My guess is that 1934 is the correct date, for the smooth rhythm and technical confident of the piece seem more typical of Benton’s work of the mid-1930s. The sketch for the painting, which Benton stated that he made in South Carolina, may well have been made on the same trip during which Benton made the sketches for Lord Heal the Child in the vicinity of Greenville, South Carolina.

The title Ploughing it Under comes from legislation passed in 1933 as part of Roosevelt’s New Deal, which endeavored to raise farm prices by cutting back on the production of agriculture goods. Since spring crops had already been planted by the time legislation was passed, the government paid for millions of acres of cotton to be plowed under.

Benton was the first major American painter to roam through the Deep South and the 1930s was Benton’s most significant period. While he worked compulsively during that decade, most of his effort went into a series of enormous mural projects for the New School of Social Research, the Whitney Museum of American Art, the state of Indiana and the state of Missouri. Consquently, major easel paintings from this period are relatively rare. In short, this is an example of Benton’s best work and best subject matter from his best period, and is the kind of painting that rarely appears these days on the art market.

On the Road with Thomas Hart Benton: Images of a Changing America,
organized by the Morris Museum of Art

From the Heart of a Regionalist: Paintings by Anthony Benton Gude, Great Plains Art Museum, University of Nebraska-Lincoln, June 3-July 31, 2005