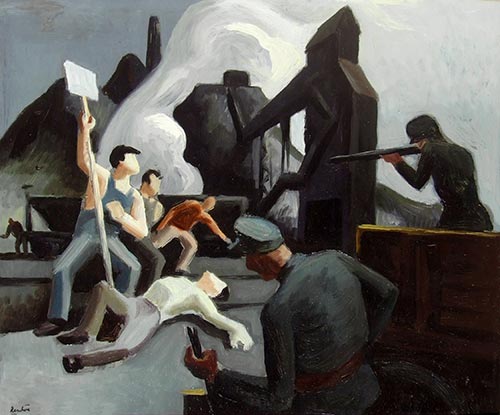 Benton made two compositions around this time of strike activities, this piece and a painting titled Strikebreakers, 1931, which was formerly in the collection of Senator William Benton of Southport, Connecticut. He clearly thought that this was the better of the two since he used it as the basis for a lithograph, Strike (also known as Mine Strike) which was issued in 1933 by the short-lived Contemporary Print Group, which also included such well-known artists as Reginald Marsh, Jose Clemente Orozco, George Grosz, and John Steuart Curry. Benton described the scene as: “Strike battle in the coal country. This is an imaginary reconstruction of a situation only too common in the late twenties and early thirties.”

Benton was particularly interested in social issues in 1933, since in that year he illustrated a modern social history of the United States by his friend Leo Huberman, We the People, published by Harper & Brothers, New York.

The oil sketch on the back is also very interesting. It is a study for a painting titled Waiting, 1934, a work you will find reproduced in the catalogue of Benton’s exhibition at the Associated American Artists in New York in 1934, plate 30.

In 1935 Lewis Mumford drew attention to Waiting in a New Yorker review of the last show Benton held at the Ferargil Galleries, before moving back to Kansas City. While critical of the bombast of much of Benton’s work, Mumford admired the side of Benton that poetically recorded intimate scenes. As Mumford wrote:

“This is the Benton who carries over into his smaller oil paintings a sense of the peace and beauty and lonely wistfulness of man facing the earth. He shows us the tired farmer at his plough, or a solitary figure and a water tank and a freight car under the moonlight—‘Waiting.”…In these smaller paintings, there is no fake hardness, no fake anti-intellectualism, no silly jingoism…After the Riptail Roarer and Peck’s Bad Boy have had their fling, there may still be a handful of his paintings that one will not be ashamed to house in the same gallery that holds a Ryder.” (Lewis Mumford, “The Three Bentons,” New Yorker,vol. 11, no. 10, April 20, 1935, pages 48, 50, 53.)

Benton’s use of oil on tin has an interesting origin. The father of his wife Rita was an Italian copper and tin worker, and Benton picked up the habit of making paintings on scraps that were left over from his projects.