The History of Water 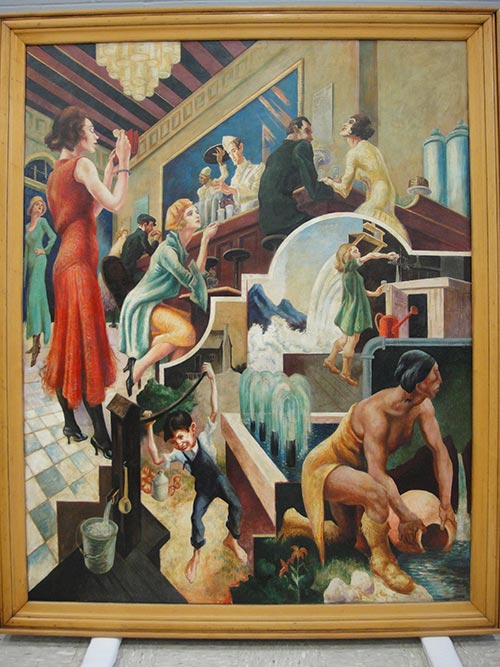 Thomas Hart Benton established his reputation in the 1930s with five mural projects which changed the face of American art and provided the principle artistic model for the WPA mural program. They are generally considered the most important mural projects ever executed in the United States. Four of these projects, have an extensive bibliography and have been widely reproduced in monographs and textbooks on American art. The fifth, The History of Water, disappeared from sight soon after it was executed, since when the drugstore in Washington D.C. for which it was painted went out of business, it was removed from the wall and placed in the basement, where it sat unnoticed for nearly half a century. It was rediscovered in 1985, when someone noticed that it was signed Benton in black paint at the lower right. After being verified as a long-missing work by Thomas Hart Benton, it was put up for auction at Sotheby’s (sale of December 6, 1984, lot no. 219).

Since Benton’s murals of the 1930s, the group of works most closely related to The History of Water, have almost all been moved from their original locations I think it’s helpful to list them here.

While admittedly more modest in scale than the other four murals, several things make The History of Water quite notable both historically and artistically: it comes from Benton’s best period, it is exactly contemporary with Benton’s most important mural, America Today, and relates very closely to it; and finally, it may well be the last Benton mural of the 1930s which will ever come for sale.

The commission for The History of Water came about because of Benton’s creation of his first and arguably his great mural, America Today for the New School for Social Research in New York, a center of progressive and reform-minded educators (including several figures who had recently been fired from Columbia University, such as Marxist historian Charles Beard). For nearly a decade Benton had been producing a series of large mural-like history paintings, The American Historical Epic, in the hope that some architect would provide him a wall to paint. In 1930, when Benton was represented by the Delphic Galleries, Alma Reed, who managed the gallery, arranged a commission for her lover Jose Clement Orozco to execute a mural for the dining room of The New School for Social Research, which was being built to design by the modernist Joseph Urban. Outraged that a Mexican should be favored over an American, Benton’s friend Ralph Pierson went to the director of the New School, Alvin Johnson, and arranged a commission for Benton as well – a mural for the building’s board room. Since there was no budget for such a painting, Benton agreed to execute the project for no pay except for the cost of the materials. As he memorably told Johnson (referring to his egg tempera medium): “I’ll do the mural if you’ll give me the eggs.”

Aware that Benton was hard-up, and obviously embarrassed that he was being financially exploited, Johnson made restitution by arranging another commission for Benton for which he was actually reimbursed: a painting on the theme of The History of Water for a drugstore in Washington D.C. It’s unclear where Benton executed the painting, but since it’s too large to have fit in his apartment most likely he either executed it in situ in Washington D.C., or in the very loft-space in New York that Alvin Johnson provided to him for the creation of America Today.

My belief is that The History of Water is almost exactly contemporary with Benton’s last (and best) two panels from the America Today mural, City Activities with Subway and City Activities with Dance Hall. Many of the motifs in The History of Water are extremely similar to the ones in these two panels and it’s likely that they were based on alternative sketches that Benton had made of the same models. In particular, the background of The History of Water, the soda-fountain scene is extremely similar to America Today, so much so that it almost might be considered an additional scene of the mural.

For example, the woman with a hat and high heels who is sitting on a barstool in The History of Water also appears in City Activities with Subway. She is the well-known burlesque performer Peggy Reynolds, who appears in the subway scene of America Today, where she is being ogled by Max Eastman. In fact, Benton probably used exactly the same drawing for both murals (this drawing is now in the collection of Equitable Life Assurance, which also owns the America Today mural). To prevent this reuse from becoming too obvious, he reversed the direction of the head and changed the color of her hat (from red to gold) and of her dress (from gold to blue).
Most of the other figures are extremely close to those in a similar soda fountain scene on the right hand side of City Activities with Dance Hall. From Benton’s unpublished memoir, The Intimate Story, we know that the soda jerk in America Today was his friend Leo Huberman, who wrote a Marxist history of the United States, published in 1933, We, the People, which Benton illustrated. The figure in The History of Water seems to be the same person, with the same features and hairline, although drawn a little more loosely and equipped with a hat. I think it’s likely that the man and woman seated at the counter were also based on sketches that Benton made of the figures sitting at the counter in America Today, although he deliberately jiggled their likeness a little to make the resemblance not too noticeable.

As one studies the two paintings more closely, one can pick out other interesting visual parallels. For example, the metal coffee cylinders at the upper right of The History of Water are quite reminiscent in form of the bootleg liquor distillery that appears at the lower left in City Activities with Dance Hall.

Several figures in The History of Water also bear a general relationship with figures in Benton’s next major mural project, The Arts of Life in America, 1932, for the Whitney Museum of American Art. Thus, for example, the figure with a cap at the end of the counter is similar to the man sipping coffee in the section of the Whitney mural that Benton titled “None Shall Go Hungry.”

The foreground of The History of Water does not closely relate to America Today. Probably Benton made new drawings for this section, although the figures resemble figures found in other murals. Thus for example, the kneeling Indian resembles Indian figures found in Benton’s American Historical Epic of the 1920s, as well as Indians found in the opening scenes of his mural of A Social History of Indiana. The little boy pumping water at the lower left is probably Benton’s son, Thomas Piacenza Benton, who was included a few years later in Benton’s Arts of Life in America mural, where he is reading comic books with Benton’s nephew Roger Small (the son of Benton’s younger sister, Mildred). I suspect that the little girl may be one of Benton’s nieces but can’t provide a specific identification.

The authenticity of The History of Water is confirmed by the fact that there are many studies by Benton for the composition, including drawings preserved in the Benton Trust. A study for The History of Water, showing the complete composition, tempera on board, 20 x 18 inches, was sold at Christie’s on December 5, 1986, lot 264. A sketch for the girl at the soda fountain is in the Benton Trust and is reproduced in a book by Karal Ann Marling, Tom Benton and His Drawings (University of Missouri Press, Columbia, Missouri, 1985, reproduced on page 128; discussed by Marling on page 125). The Benton Trust also holds a drawing of a coffee urn that probably provided guidance for this mural (Marling, page 29).

Several factors make The History of Water notable both historically and artistically: it comes from what is generally considered to be Benton’s best period; it relates closely to Benton’s most famous mural, America Today; and, it may well be the last Benon mural of the 1930s that will ever come up for sale.